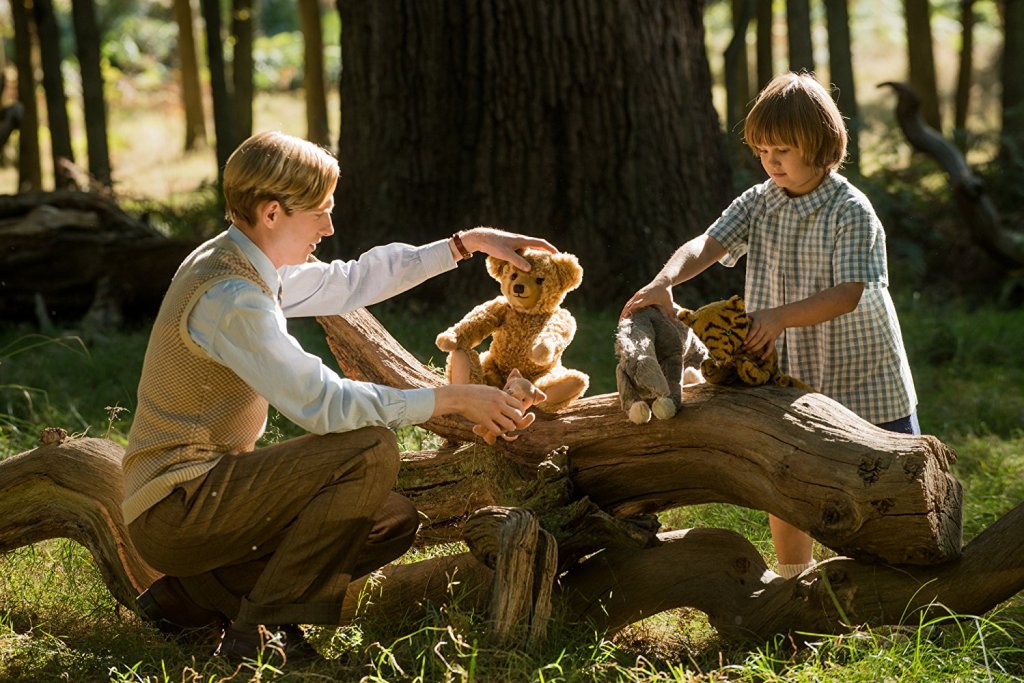 Once again, I find myself apologizing for the lack of content on this blog. Funny how time gets away from you when you start working your first real post-graduate school job! Since September, I’ve been hard at work in my role as an emergency psychiatry clinician, doing risk assessments and safety evaluations in the emergency department. It’s tough, rewarding, frustrating, and interesting work — and it leaves very little time for reflective blog-posting!

Goodbye Christopher Robin is a film inspired by the life of A.A. Milne (played endearingly by Domhnall Gleeson), author of the beloved Winnie the Pooh books. Specifically, the story focuses on Milne’s son, Christopher Robin, whom I didn’t actually know was a real person before this movie!

I bought my ticket for Goodbye Christopher Robin without the expectation that I would be seeing, at least partially, the experiences of a man wracked with post-traumatic stress disorder after returning from World War I. But this is the very first thing that this film presents you with — A.A. Milne, suffering from flashbacks and hyperarousal that is typical of many PTSD presentations.

Before PTSD became universally recognized, the term “shell-shock” was used to describe the symptoms of men and boys returning from World War I. It covered everything from nightmares, being easily startled by loud noises, and panic attacks. It later became known as “combat stress reaction” during World War II and eventually found its way into the Diagnostic and Statistical Manual (DSM) in 1980 as post-traumatic stress disorder. The diagnostic criteria are extensive and fall under four main categories: the trauma experience itself, intrusive symptoms, avoidance symptoms, and negative mood symptoms.

PTSD, contrary to popular belief, is not just for those returning from war; it can be the result of many types of trauma. This can include witnessing a trauma happen to another person, hearing about a trauma suffered by a loved one, or even long-standing indirect exposure to traumas as a result of one’s job. Interestingly, the trauma experienced by exposure through social media does not count, though I wonder if this will change once there is more research into current social media trends. Prevalence of PTSD is high, with one study citing up to 3.6% of men and 9.7% of women living in America who carry this diagnosis (numbers are relatively higher in countries experiencing prolonged crises).

Overall, the script does a fantastic job of weaving Milne’s PTSD symptoms into the plot, and Gleeson does an admirable job portraying them. Early in the film, we witness Milne on the front lines during the Battle of the Somme — the bloodiest battle of World War I where over 19,000 British troops died and over 54,000 were wounded in one day. Almost instantaneously, we are transported to Milne’s present day: he is attending a post-war event, and we realize that the scene we just saw was a flashback to the war. Milne is frozen in place, and his wife, Daphne, pulls him from his dissociative state.

Later, we see him startled by a popping champagne cork, angered by a balloon popped accidentally, and horrified when he flips into combat mode while horsing around with his son. We see the stress this causes for both him and his loved ones, and the time and effort it takes for him to recover from these intense emotional states. It is an excellent portrayal of what a person experiences when living with PTSD after combat.

In perhaps the most endearing scene, Milne’s friend recognizes that he is triggered by the sound of popping balloons — and instead of confronting him or making a scene, continues to pop the rest of the balloons with a face that says, “Hey, I’ll help you get through this.” The friends and Milne’s son frolic around popping balloons, and you get a glimpse of how men of this era may have been supported by loved ones in the absence of modern-day treatments. Is this type of exposure therapy-lite recommended by professionals? Probably not, but it made for a really lovely and realistic scene.

Eventually, Milne works through his PTSD with his creation of Winnie the Pooh — though, without spoiling the film, this creates a host of other problems. And, given that this is not a movie dedicated to delving into mental illness in the early 1900s, the PTSD does not remain a salient plot point for the rest of the film. However, what they do show appears to be accurate and does a good job of neither sanitizing nor demonizing Milne’s experience.

As someone who grew up reading Winnie the Pooh (and watching the animated shows, and owning a stuffed Pooh Bear myself), this movie was almost too much for me. However, the visuals of the English countryside and the origin story of my favorite childhood characters was lovely to watch. One of these days, I’ll write about how Eeyore is a great depiction of depression, I swear.

Finally, I wanted to tell everyone to check out my dear friend Victoria Malè’s new podcast, Your Biggest Fangirl! She and her friend Kristen Chavez endeavor to discuss all things fangirl-related, in a way that critically analyzes and celebrates all sorts of fandom goodness. And I was lucky enough to be one of their first guests! The podcast went live today, so check them out on iTunes or wherever you download podcasts. Spoiler alert: I’ve listened to all the episodes they’ve released so far and they’re truly engaging.

Check back next week for another review, and as always, feel free to leave suggestions for movies I should cover!