Two weeks ago (Sept. 14th) would have been Amy Winehouse’s 33rd birthday.  Last year, a stunning documentary was released celebrating her life, her music, and examining the situations that led to her untimely death in 2011. The visuals consist entirely of footage recorded by friends, media appearances, paparazzi videos, and professional recordings, combined with vocal testimonials from people who were close to her. Amy (2015) tells the story of an incredible artist whose life ended far too early due to a host of substance use and untreated mental health concerns, all amplified by the crucible of media harassment.

The film begins with a friend’s home video, where an Amy in her early teens sings “Happy Birthday.” Even at her young age, her distinctive vocal style is present, giving the viewers a glimpse of the talent she was born with and would go on to perfect. It was at this point that I knew I would be crying the whole time (I may or may not be tearing up while typing this out). My favorite scene is a recording session between Amy and Tony Bennett, in which they express their mutual admiration. You can really see Amy’s dedication to her musical craft, as well as her humble nature — something that was not often portrayed in the media while she was alive.

Though I consider myself a fan of Amy’s music, I admit I didn’t know much about her personal life before watching this movie. I tangentially followed her story as a teenager and was shocked at the news of her death when I was 20 years old. In the aftermath, I think this scene from Broad City (via oh-whiskers on tumblr) pretty much describes the feelings of my generation:

One fact I learned through the documentary was that Amy suffered from an eating disorder along with her substance use. Another was how true to reality her song “Rehab” was. The line “I ain’t got the time / and if my daddy thinks I’m fine” is mirrored directly in the film when Amy asks her father if she thinks she should go to rehab, something her friends were lobbying hard for at the time, and he declines to push her towards treatment.

As a teenager, I watched a lot of E! News and other shows that covered celebrity life because I didn’t have access to the Internet to fulfill my celebrity gossip needs. Unfortunately, I remember many of these shows absolutely reaming Amy Winehouse on a regular basis — on her appearance, her partying, her performances, her relationships. In the screencaps below from the film, a stand-up comic makes a particularly awful comment in 2011 after Amy’s disastrous performance in Serbia: 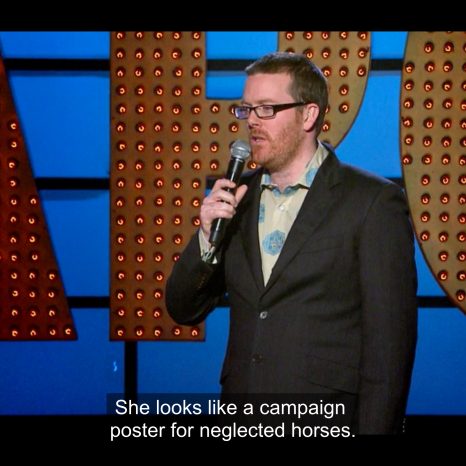 Though, of course, Amy was not the first to be the subject of comments like these, nor will she be the last. Just look at the media treatment of other female celebrities when they were going through crises: Britney Spears, Amanda Bynes, Rihanna, Sinead O’Connor, Drew Barrymore. The list goes on. But that’s an issue I could probably start a whole new blog about.

In the United States, approximately 7.9 million adults struggled with both substance use and other mental health disorders in 2014. The relationship between substances and mental health is complex, with many people using substances as a way to lessen their symptoms when they can’t or don’t want to seek treatment from more traditional sources. Substances can also worsen mental health symptoms, cause dependencies that strain relationships, or result in criminal charges related to use. Unfortunately, the use of substances also affects a person’s eligibility for certain government benefits, often contributing to a vicious cycle that is difficult to end.

Many of these issues are put on display in this documentary. You see Amy struggle with her decision to enter treatment, the abusive relationships she was controlled by, and the pressures she faced from her music producers. You also see just how damaging the harassment of paparazzi can be and how it seems to exacerbate her already fragile state.

In some of the criticisms of Amy, there is the idea that the film itself does not celebrate Amy enough and instead focuses on her demise, falling into the same trap it berates within the film. However, I tend to disagree with that conclusion. Though the film could have spent more time on her artistry, it is in the way the media treated her that the public can learn a very important lesson. I agree that Amy’s story should not be used merely as an educational device, but I do not want to ignore the power that her story can have on others. I would love to hear your thoughts in the comments if they differ from mine, even if you haven’t seen the film.

Overall, I really enjoyed this look into Amy Winehouse’s life, death, and legacy. I loved her music before she passed and I continue to adore it now, even though the lens through which I absorb it has shifted. If you feel up to it, I recommend sitting down and watching this movie — while the lows are very low, the highs are beautiful and a true testament to Amy Winehouse’s artistic brilliance.

In an effort to contribute positively to the legacy of Amy Winehouse, I’ll end this post with one of my favorite versions of her song “Some Unholy War.” Rest in peace, Amy.